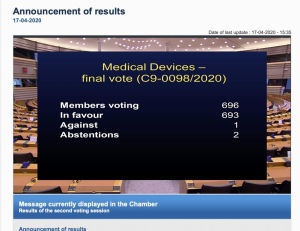 With the overwhelming vote in the Parliament in favor of the Commission proposal to amend the MDR it is politically basically a done deal now that the MDR will be amended.

After the vote there were people that immediately stated that the amendment was formally approved – not so. We are looking at law making in the ordinary legislative procedure, which is co-decision making between the Council and the Parliament – they each need to adapt a position in first reading and then compare notes to see if further conciliation is needed. To speed things up to the maximum extent the Council gave a mandate in which it outlined what would be acceptable to the Council.

The Parliament’s vote for its first reading seems to fit this mandate perfectly, which means that the Council can now also adopt its position in first reading (which it will likely do special proceedings via the COREPER, because normally it would need to convene in person). Then the agreed amendment needs to go past the ECOSOC (who is already prepared to be part of the solution and ready to go) and the Committee of the Regions. Normally there would also be eight weeks for national parliaments to have an opinion, which has been skipped this time. Only then can the proposal be published and enter into force on the day of publication.

“the EESC would like to reiterate the request made in its previous opinion on this topic, namely that the functioning of the Regulation should be formally reviewed, jointly by authorities and stakeholders from civil society, three years after its entry into force, to ensure that its objectives are being met.”

Complexity? Rather underestimation and under-resourcing

The recital 4 to the amending Regulation state that:

“Given the unprecedented magnitude of the current challenges, and taking into account the complexity of Regulation (EU) 2017/745, it is very likely that Member States, health institutions, economic operators and other relevant parties will not be in a position to ensure the proper implementation and application of that Regulation from 26 May 2020 as laid down therein.”

OK, the MDR is complex, but it was not a surprise except to those that deliberately chose to stay uninformed. Implementation was not that complex because it was a regulation, of which the whole idea is that there is not that much to implement. Many responsible companies attacked the problem with a lot of energy and at considerable costs and were as ready as they could be in Q1 2020, prepared to give this their best shot. Many others chose to do differently, to which I can only say that staying uninformed was a choice in this case.

The elephant in the room here, obviously, is how the Commission and the Member States failed to ensure proper implementation, as has been discussed on this blog over the more than nine years that I am tracking the MDR and IVDR. Essential guidance, Common Specifications and implementing acts late or delayed. Almost none of the Member States has their implementing legislation ready. It shows that the authorities, both at EU and national level have structurally underestimated and under-resourced the MDR and IVDR implementation. This will not be fixed in the year and I am quite certain that still many actions outstanding in the Rolling Plan and the Ongoing Guidance development document will be completed in time, because the root cause has not changed.

The only difference is the move of the medical devices policy from DG GROWTH to DG Health and Food Safety (DG SANTE), which may make something of a difference – hopefully.

It is always nice to be able to celebrate a success, but what will this amendment actually achieve? Will it avoid a situation of ‘Dead on Arrival’? The move of the DoA creates time here and there, but it does not create extra capacity. A basic principle of load balancing is that if you move load to relieve a bottleneck, there must be capacity elsewhere in the infrastructure that the load can be moved to, otherwise you just create another bottleneck elsewhere.

“a significant impact on various areas covered by Regulation (EU) 2017/745, such as the designation and work of notified bodies and the placing on the market and making available on the market of medical devices in the Union” (recital 2 of the proposal)

Granted, the additional year does give authorities, economic operators and notified bodies one more year to prepare for the MDR, but it does not create more capacity.

What will the move of the DoA allow manufactures to achieve? They will have less time to convert old (AI)MDD certificates to MDR certificates (three years instead of four years). – capacity problems may ensue at manufacturers and notified bodies. They have more time to finish preparing their QMS for article 120 (3) life (MDR QMS partially and no significant changes). The good part for innovation here is that the time frame in which no significant changes are allowed is shortened.  One more year to change notified body or start up new conformity assessment under the (AI)MDD pre DoA? Don’t bet on it, because notified bodies are generally still not taking new customers or staring new conformity assessments for (AI)MDD certificates because they did not suddenly get extra capacity.

The application of article 59 pre-DoA has the consequence that any essential medical devices that (still) do not make it for the new DoA can be pseudo-CE marked with a pan-Union emergency implementing act. However, this immediately begs the question as to capacity at the European Commission to crank out implementing acts. Given the track record of the Commisison in adopting implementing acts under the MDR and IVDR, this is not a happy picture. Nobody wants to rely on article 59 MDR as a magic bullet as it currently looks like and only as a last resort, but we’ll have to see how the Commission and the other institutional actors operationalise the article 59 MDR procedure.

I still think it was a mistake not to use this opportunity to also bring article 54 IVDR (the analogue in the IVDR) forward to be able to have a pan European approval mechanism for COVID-19 tests, of which there are shortages everywhere at the moment.

The proposal moves dates for Eudamed in a way that it will be possible for Eudamed to be phased in as was originally intended, but then one year later. This begs the question whether the Commission actually intends to depart from its plan to launch Eudamed at the date of application of the IVDR. While the dates change, the legal basis for the Commission to wait until it is ready (article 123 (3) MDR – the ‘what if Eudamed is not ready in time’ provision) has not changed, so the Commission can decide to already default against the change date of 25 March 2021 as latest date for the ‘Eudamed is ready’ notice and 26 May 2021 as date on which Eudamed should go live by the letter of the amended MDR.

It would be very helpful for the market to know what the Commission will do. Does the Commission  intended to stick to the December 2019 plan (default no matter what, and go live end May 2022) or is there a possibility that it will try to get back to the default launch trajectory as now amended? There is a year between the two possible go live dates so that would be helpful to know, as it is less evident for us on the outside which of these options the Commission is planning for.

By the way, we’re still waiting for clarification promised last December about how to work with Eudamed when it’s not live yet after the DoA. The Commission could helpfully clarify all these things in one go!

I have blogged before about the effect of the move of the DoA on the three country eXits from the Union.

Swiss Medtech immediately issued a press release after the Parliament vote that this means one year more business as usual under the existing MRA between the EU and Switzerland. The same would be true for Turkey, but not for the UK, as the UK has left the Union beginning this year and looks like it will not rely on the option to extend the transitional regime for Union law beyond 31 December 2020.

The adopted proposal will need to be published in the Official Journal for it to enter onto force. The good news it will enter into force upon the date of publication, which should be before 26 May 2020 in order to avoid a legally very awkward situation of the MDR becoming applicable only for the date of application to be moved retroactively.

I expect the publication will be very soon after adoption of the first reading by the Council, which I expect second half of the week of 20 April.

This would mean that the amending regulation could be published, and enter into force, soon after. 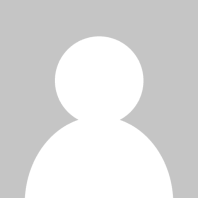 Labeling and Advertising of Alternative Protein

Sneak peek of Vitafoods Protein Summit Consumers nowadays tend to include more and more plant-based products into their diet. For instance, a study ordered by DuPont Nutrition established double digits of growth for non-dairy ice-cream, dairy and cheese during the year preceding June 2018.  More recently, NPR published an overview demonstrating which products were most […]

What would food be without packaging? And what does packaging mostly consist of? Of course: plastic! To date, only few other materials have proved as reliable for food packaging as plastic. At the same time, we know that plastic has many disadvantages for the environment. Read this blogpost to be informed on the most important […]